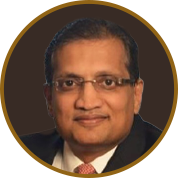 Prior to setting up White Oak Capital Management Consultants LLP in June 2017, an investment advisory firm in India, Mr. Prashant Khemka spent 17 years at Goldman Sachs Asset Management (GSAM) from March 2007 to March 2017, and also for the Global Emerging Markets (GEM) Equity from June 2013 to March 2017. He won several accolades as the CIO and Lead PM of GS India Equity. He and his fund won several awards including AAA rating from Citywire and Elite rating from Fund caliber among others. In addition to his long-standing India investing experience, Prashant brings a unique perspective derived across developed and emerging market equities and has successfully managed US and global emerging markets funds for leading institutions, during the last two decades.

Prashant graduated with honors from Mumbai University with a BE in Mechanical Engineering and earned an MBA in Finance from Vanderbilt University, where he received the Matt Wigginton Leadership Award for outstanding performance in Finance. He was awarded the CFA designation in 2001 and is a fellow of the Ananta Aspen Centre, India.