Best PMS AIF Products for next decade of Wealth Creation

PMS AIF WORLD is a new age wealth management firm and provides one of the best investment services. Its making relentless efforts towards Informed approach to Investing by way of super well audio-video content of interviews with portfolio managers, and quarterly newsletter, Investonomics.

Recently, it organised its 1st PMS AIF WORLD Summit, in Mumbai and demonstrated the industry as to what is a well-articulated conference in terms of quality of theme, content & discussion.

In the same conference, PMS AIF WORLD unveiled first of its kind efforts towards informed investing by way of announcing brilliant format of awards in the PMS AIF Industry in coalition with IIM A.

Data of 106 PMS schemes and 30 AIF schemes was analysed across parameters of risk-adjusted returns and 17 winners were announced across 9 categories of awards. The study was done under the leadership of Professor of Finance, Mr Ajay Pandey, IIM A and with the mentorship of CEO, PMS AIF WORLD, Kamal Manocha, assisted by a core team of PMS AIF WORLD.

The analysis is first of its kind efforts in this industry and truly helps PMS and AIF investors in making informed investments. The objective of this study was to recognise the long term – medium term – as well as short term performance. Another objective of this study was to acknowledge older / established names as well as New Comers. Finally, the objective was to compare sizable funds separately and less than 100 Cr category of funds separately.

9 Categories for Awards were Conceived on the basis of the sufficient number of contenders in each category (mentioned in the image below). 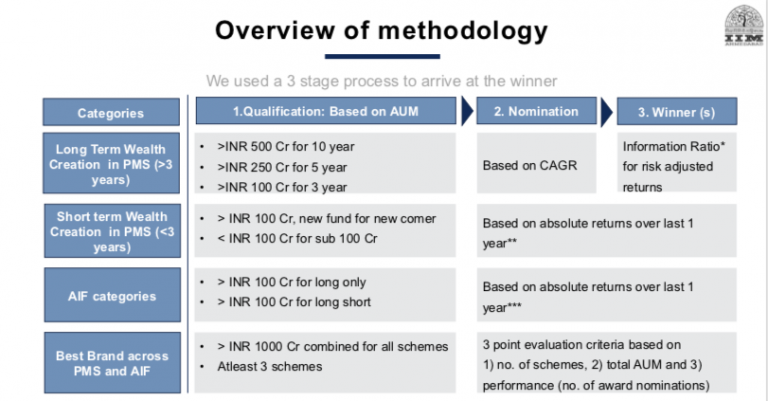 The methodology of these awards involved nominating top 5 PMS AIF schemes on the basis of CAGR as well as AUM in the respective category of awards (mentioned in the image below).

Here is the list of Top 5 Nominations across all category of PMS products in the last 10 Year as per CAGR and AUM filters (mentioned in the image below).

Let’s understand what is risk-adjusted returns?

For investors, what matters is how much return is generated per unit of risk. This is because, while many products generate returns in long term, but, investors seldom get benefit owing to the extreme volatile patterns of these returns where investors tend to lose confidence during bad times and do not remain invested. So, those portfolios amongst top 5 best performers as per CAGR, that also show relatively less volatility in returns or take less per unit of risk are considered as winners.

Top 3 Winners in the 10 Year as per parameters of risk-adjusted returns
(mentioned in the image below).

Here is the list of Top 5 Nominations across all category of PMS products in the last 5 Year as per CAGR and AUM filters (mentioned in the image below).

Top 3 Winners in the 5 Year as per parameters of risk adjusted returns
(mentioned in image below).

Here is the list of Top 5 Nominations in Multi-Cap PMS in the last 3 Year as per CAGR and AUM filters (mentioned in the image below).

Top 2 Winners in Multi Cap PMS in the last 3 Year (mentioned in image below).

Here is the list of Top 5 Nominations in Mid-Small cap PMS in the last 3 Year as per CAGR and AUM filters (mentioned in image below).

Top 1 Winners in Mid-Small cap PMS in the last 3 Year (mentioned in image below). Only one winner in this category was announced as all others had very low returns. 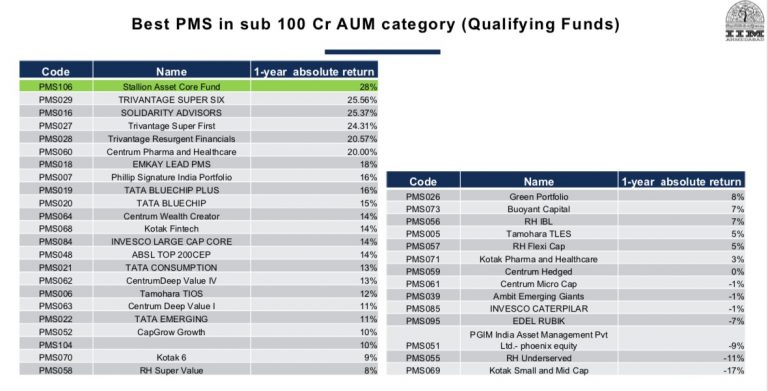 Here is a list of best New Comers. All those PMS companies that started PMS business in last 3 years were considered in this category and their last 1 year of performance was assessed. Since products studied in this category started at different dates in last 3 years, for correct comparison, only past 1 year of performance could be assessed and hence there was not point of analysing risk-adjusted returns, so, only absolute returns were studied and winners were announced accordingly.

Here is the list of Best New Comers. Top 2 were announced as Co-Winners.

Here is the list of Best PMS in less than 100 Cr category. 39 schemes were studied and top 1 winner was announced.