How to invest in businesses of the future?

How to invest in businesses of the future?

Piper means Black Pepper (originated in India) and Serica means Silk (originated in China). Mr. Abhay Agarwal believes that India and China are very similar with respect to culture & demographics. As far as economic growth is considered, China is probably 15-20 years ahead of India and this is where India can look up to China to understand the biz. of the future. This is what is the core of their company.

Investments make return from future earnings and that is why it is sometimes quite difficult to estimate returns. It is very easy to look at past earnings and calculate a P/E Multiple but past earnings do not create returns for you; returns are generated from the earnings that will be made in the future and this is where most naïve investors stumble— rather than understanding the business story and its potential, most such investors run screeners and based on past earnings, invest a chunk of money. This is a reason why growth investing outperforms value investing.

Past earnings create an illusion of knowledge and comfort.

When one is looking at past earnings, one often fails to realize that old industries get disrupted with the evolution of:

The above parameters can be reflected in the following examples:

To earn from future earnings, what is of primary importance to investors is to identify high growth industries. This, in itself is not a simple task to do but once this deduction is made, the task then narrows down to identifying the best player in that industry— the best bet amongst all available & existing players. This implies identifying and betting on the most competitive leader in the industry. Once a portfolio of such companies is built, it is of utmost importance to manage the portfolio risk by doing adequate diversification across sectors.

It is evident the above plotted graph that the FAANG stocks have shown a massive outperformance as compared to its counterpart benchmark indices. In absolute terms, in 9 years, the FAANG Stocks have created a market cap of $5.6 trillion. To put that into perspective, that is almost 2 times the entire market cap of the Indian Stock Market. Agreed that the FAANG stocks have gained popularity today, but they were quite well known in 2012 (9 years ago) as well. But the question is, how many investors understood the potential of this massive value creation and invested in these stocks?

The bright side picture of this analysis is that this is not just a global phenomenon. While FAANGs are a cohort of the US Markets, Indians are following up & catching the trend. India is ready for such massive wealth creation, if investors do figure out the right stocks to invest in. Having a median age of 28, India has the youngest population with the maximum zeal, quick in adapting technology and that gives us an edge along the way. The millennials and the Gen Z are ‘turbocharging’ the industries and this is happening all around us, across all sectors. The population demographics show that India has the highest number of young population today, as compared to China, Indonesia, Japan, South and Korea— and this is because of which growth will kick in.

This is not the first time that India will see such growth. HDFC Bank, that started in 1994, today stands at a market cap of INR 8 lakh crore. This bank disrupted banking on the face of the country and has a market cap greater than that of all the PSU banks put together in India. This shows a strong and disruptive business can create massive wealth over the years. A similar story panned out for Tata’s Titan when it entered the Jewellery retail segment. There are many more examples that are witness enough to understand that the same thesis is being played out over and over again.

If we compare to China to understand the white spaces and the potential growth that is possible, following observations can be made:

Our traditional valuation models will always make us leave out on businesses that look “expensive” but the reality is that these competent companies which are leaders in a very high growth segment will always remain expensive and despite being so, will always create much higher returns for investors than any other company. To put this into perspective, the following table shows the multiples and the premium at which the companies were trading at in 2005 and the returns they generated in 2020.

Market rewards rare companies like these that are leaders in their respective industry spaces.

Some of the portfolio constituents of Piper Serica’s Leader Portfolio are: Apollo Hospitals, Info Edge, Dixon Tech, Angel Broking, and so on.

As an underlying for risk management, the optimal number of stocks to hold, as per them, is 15-18 stocks and they strongly believe in doing so. Also, any single stock is not more than 10% of the entire portfolio and a quarterly assessment of all stocks across the portfolio is mandatory to make investment decisions. Apart from this, strict and disciplined adherence to valuation changes eliminates the incorporation of human biases into it; thus, keeping it a fair game. 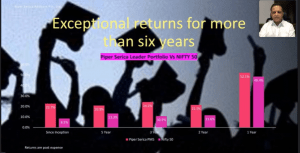 Their portfolio has beaten the benchmark Nifty 50 across all time horizons, since the inception of the fund.

To look into the future, if one wants to make money, it is imperative to understand the businesses that are emerging and are creating a platform. For instance, Apple underperformed for a few years but when it understood the importance of creating its own base, its own platform, App Store emerged and that was what sold! Similar story played out for Google through its Play Store. For companies like Nokia that just focused on selling products, rather than focusing on the platform, it failed. A company needs to be a constantly improving, value added platform, to create real wealth in due time.

Talking about the businesses of the future, the discussion is incomplete without diving into the topic of Electronic Vehicles or EVs. A large number of vehicles are now running on the roads of China and China is also exporting a lot of 2-wheeler EV bikes to India. Of course the quality and comfort of these, as compared to the ICs is not at par, but these parameters are changing rapidly and India is working towards changing the battery problem. It is the battery which needs to be as efficient as possible, the rest can follow suit. It is quite possible to have massive breakthroughs in this space in India.

Unfortunately, the public listed space does not allow to grab such opportunities as of now and this is why the team at Piper Serica follows the Start-up space very closely as they see a lot of “innovation migration” happening from such unlisted spaces and they want to make sure that it does not pose a threat to any of the existing public players in the listed space in which their money has been invested in.

Moving on, the healthcare sector will also gain fame as we move along. Earlier, in India, healthcare was never given a priority, but slowly mindsets are changing and approaches are becoming efficient. Having invested in ICICI Lombard, one of the largest health insurance companies, it is observed that the under-penetration of health insurances in India is going away very rapidly and when employees are given insurance policies by the employers, they find it much easier and comfortable to go to a hospital and take treatment and let the insurer pay, and focus on health rather than worrying about the payment. The team at Piper Serica is very positive about the convergence of hospitals, pharmacy, insurance, diagnostics, telemedicine, etc.

Talking about the near future, once things open up post-pandemic, people will want to travel, dine in at luxury places, spend time at entertainment centres. There will be a demand uptick but the problem is that some of these businesses have been damaged so much that to even run at normal levels, they will need huge infusion of funds. So a lot of maintenance capex will be needed that will limit the free cash flows.

Financials is a sector which is already booming and will continue to do so. This space, being a high tech-low cost space, will improve rapidly and will happen digitally. For the GDP to grow at 10%, the basic lending & borrowing biz. will have to grow 2x of that and the biz. that adapts technology and carves a niche, will emerge out as the winner; at the same time running it like a lending biz. to not mellow down on the credit standards. If a biz. can put lending and digital together, it will be a massive wealth opportunity.

RISK DISCLAIMER: Investments are subject to market-related risks. This write up is meant for general information purposes and not to be construed as any recommendation or advice. The investor must make their own analysis and decision depending upon risk appetite. Only those investors who have an aptitude and attitude to risk should consider the space of Alternates (PMS & AIFs). Past Performance may or may not be sustained in the future and should not be used as a basis for comparison with other investments. Please read the disclosure documents carefully before investing. PMS & AIF products are market-linked and do not offer any guaranteed/assured returns. These are riskier investments, with a risk to principal amount as well. Thus, investors must make informed decisions. It is necessary to deep dive not only into the performance, but also into people, philosophy, portfolio, and price, before investing. We, at PMS AIF World do such a detailed 5 P analysis.