Equity approach that has generated stupendous Wealth across cycles

Mr. Kamal Manocha, Founder and CEO of PMS AIF World held an engaging webinar in conversation with Mr. Jigar Mistry of Buoyant Capital to throw light upon an investment approach that has been generating consistent alpha for investors by identifying the right businesses after identifying the ongoing market cycle.

PMS AIF World is a knowledge-driven, New Age Investment Services Company, providing analytics-backed quality investing service with an endeavor and promise of wealth creation and prosperity. We offer the finest PMS & AIF selection process after analyzing the products across 5 Ps – People, Philosophy, Performance, Portfolio, and Price, with an endeavor to ascertain the Quality, Risk, and Consistency (QRC) attributes that covers 9 ratios. We do such a detailed portfolio analysis before offering the same to investors.

We are a responsible and long-term investment service provider in the space of Alternates.

Invest through us in the best quality products and make informed investment decisions.

Mr. Jigar Mistry is the co-founder of Buoyant Capital. Having a rich experience of 20+ years, he has previously worked as an analyst with Kotak, Goldman Sachs, and Prabhudas Lilladher.

Before co-founding Buoyant Capital, he was the Director of Research at HSBC. His areas of historical research coverage include: India Strategy, Global Metals & Mining, Indian Building Materials, and Indian Utilities.

He has pursued B.Com and is a CA and a CFA Charter holder.

Over the last couple of years, we have observed that the Growth Style of Investing has generated excellent returns for investors. Today, Value Consciousness has emerged and recent history in markets have proven that all sectors do follow a cycle & there should be a disciplined investment approach that one needs to follow to generate consistent wealth across cycles.

A good company and a good investment are two different things. Earnings might be growing consistently but that does not necessarily imply consistent share price growth as well.

Mr. Jigar Mistry starts the presentation by stating that understanding different sectors is the first step towards such an approach & evaluating businesses across sectors is the second step. Buoyant Capital Opportunities Multicap PMS was launched in June 2016 & since then has delivered a SI CAGR of 21.2% [post-fees & post-expenses, as of 31st August 2022].

It is to be observed that as cycles run the market wheel, a fund does extremely well when the fund managers’ philosophy runs in alignment with the ongoing cycle; but starts to tumble down on performance if the FM is not able to sync his/her philosophy with the change in cycle(s). Buoyant Capital follows the approach of Cross Cycle or Business Cycle investing.

Human mind thinks in LINEAR Terms… but everything operates in CYLES! 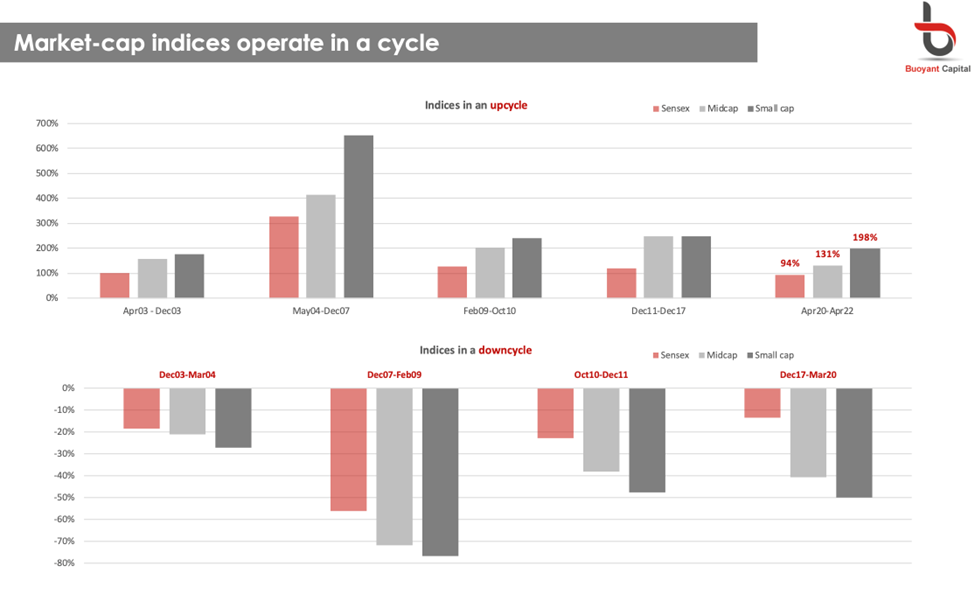 From the above infographic, it is clear that in the last 20Y, during upcycles, the small & mid caps have outperformed the large caps; and during downcycles they have underperformed the large caps. If one observes that during the downcycle of Dec ’17 – March ’20, the large cap index fell 12%, but the small cap index fell 50%. At this point in time, a naïve investor would have idealised this as a fact that one should only invest in the top constant-growth businesses and not emerging businesses. However, when the market cycle turned, it is noteworthy to observe that during the upcycle of Apr ’20 – Jan ’22, the small cap index took out the entire past underperformance in less than 2 years- it was up by more than 200% whereas the Sensex was not even up by 100%. This is what is meant by identification of cycles & investing around this philosophy.

One can witness the same behaviour across different cycles as well, as depicted in the below infographic: 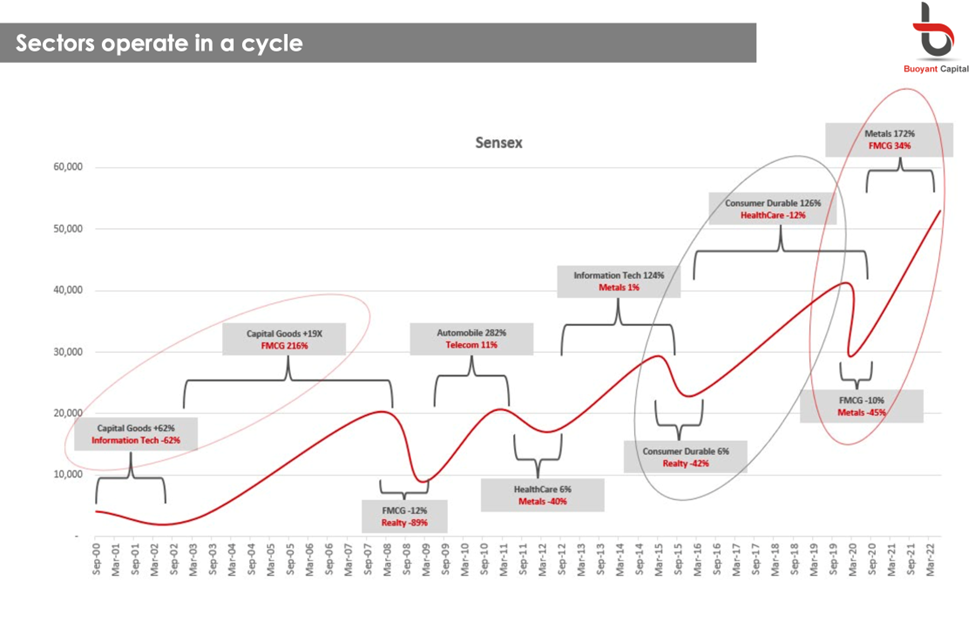 Similarly, stocks also follow cycles. Let’s understand this with the help of the following infographic: 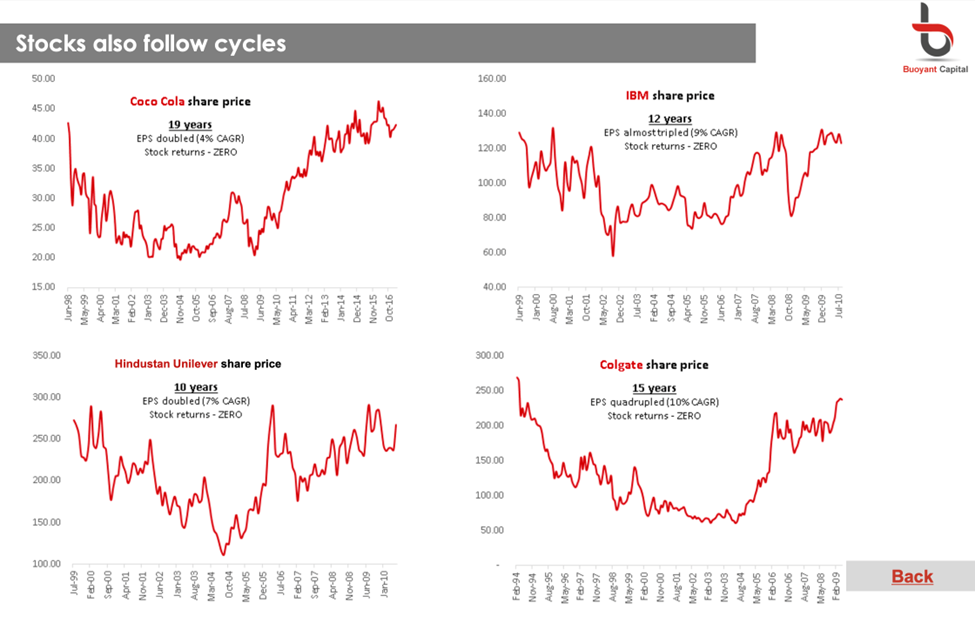 Coco Cola: Warren Buffet bought the stock in ’88-89 and for the next 10Y, the stock generated phenomenal returns. However, if one kept buying this stock and had bought in ’98, for the next 19Y, during which time the company’s earnings doubled, the stock return was essentially zero.

Colgate: Between ’94 to 2010, the stock quadrupled its EPS. During this time, the stock price return was zero.

If indices, sectors, stocks- everything follows cycles, we should invest with a similar approach.

The ‘Core Vertical’ would consist of companies that have been generating predictable consistent cashflows, are industry leaders, and have a very well re-investment structure.

After having identified the business under either Core or Satellite, the team at Buoyant Capital interacts with it in either of the 2 stances- either Aggressive [70% Satellite, 30% Core] or Defensive [70% Core, 30% Satellite]. 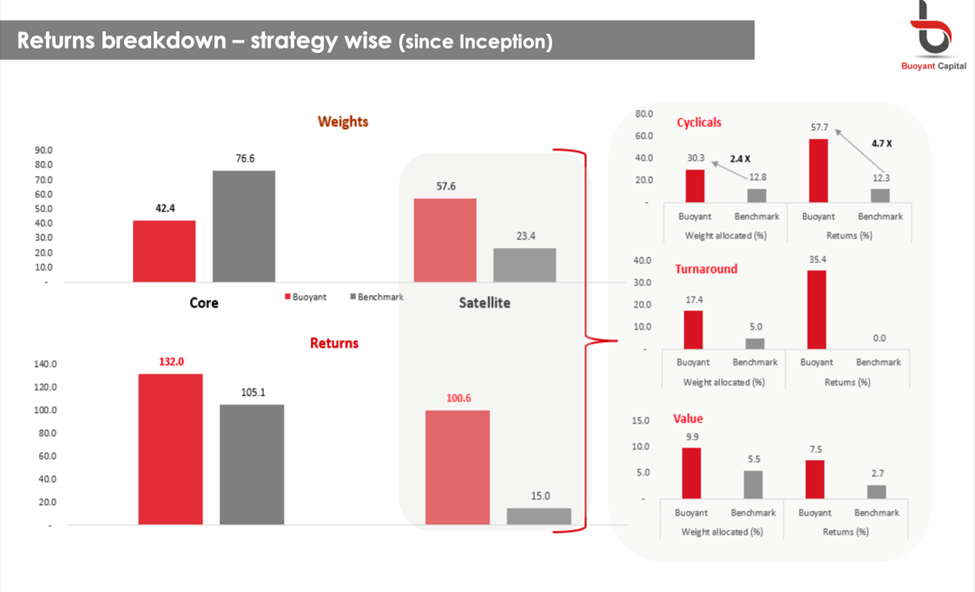 The above infographic represents the most important slide of the presentation. Since the inception of this PMS, BSE 100 [the fund’s benchmark] invested 76.5% of the capital into Core Sectors and generated returns of 105%. In comparison, Buoyant PMS invested 42.4% capital & generated a much superior return of 132%. Talking about the Satellite portfolio, the benchmark invested 23.4% of the capital & generated a very miniscule 15% returns; while Buoyant PMS invested 57.6% of the capital & earned a whooping 100.6% returns. The extreme right block gives a bifurcation of how much the PMS earned in buckets within the Satellite Portfolio.

We’ve been hopeful of the fact that while macro factors like inflation, recession, war, Covid, and so on, cloud the major developed economies of the world- India stands in a very advantageous position. Considering this scenario, our founder & CEO, Mr. Kamal Manocha asked a very interesting question- how should an investor look at his/her portfolio construction in such a cycle?

Mr. Jigar Mistry took to answer this in 2 parts. Firstly, he mentioned that liquidity is going to continue to chase Valuations, but the concept needs to be revisited now & the sector rotation should now happen more quickly in a scenario of Liquidity Tightening schemes. Good quality businesses will continue to deliver returns but that should not be the core of a portfolio.

Moving on to the 2nd part- Fundamentals- India is delivering a superior real GDP growth. He believes that the consumption sector will play out a major role in the coming years as valuations will get impacted here. Manufacturing also can pan out selectively well as they are able to pass on the costs to the consumers. Domestic facing services are another priority for the firm. IT, as a sector is not something that the team at Buoyant is very bullish on.

To sum it up, one needs to remember that while good businesses can have good growth numbers, they need not necessarily have good stock price returns and to leverage the latter, it is important to identify the right businesses at the right point of time during the right cycle.

RISK DISCLAIMER: Investments are subject to market-related risks. This write up is meant for general information purposes and not to be construed as any recommendation or advice. The investor must make their own analysis and decision depending upon risk appetite. Only those investors who have an aptitude and attitude to risk should consider the space of Alternates (PMS & AIFs). Past Performance may or may not be sustained in the future and should not be used as a basis for comparison with other investments. Please read the disclosure documents carefully before investing. PMS & AIF products are market-linked and do not offer any guaranteed/assured returns. These are riskier investments, with a risk to principal amount as well. Thus, investors must make informed decisions. It is necessary to deep dive not only into the performance, but also into people, philosophy, portfolio, and price, before investing. We, at PMS AIF World do such a detailed 5 P analysis.

PMS AIF World for investing in Best PMSs in India