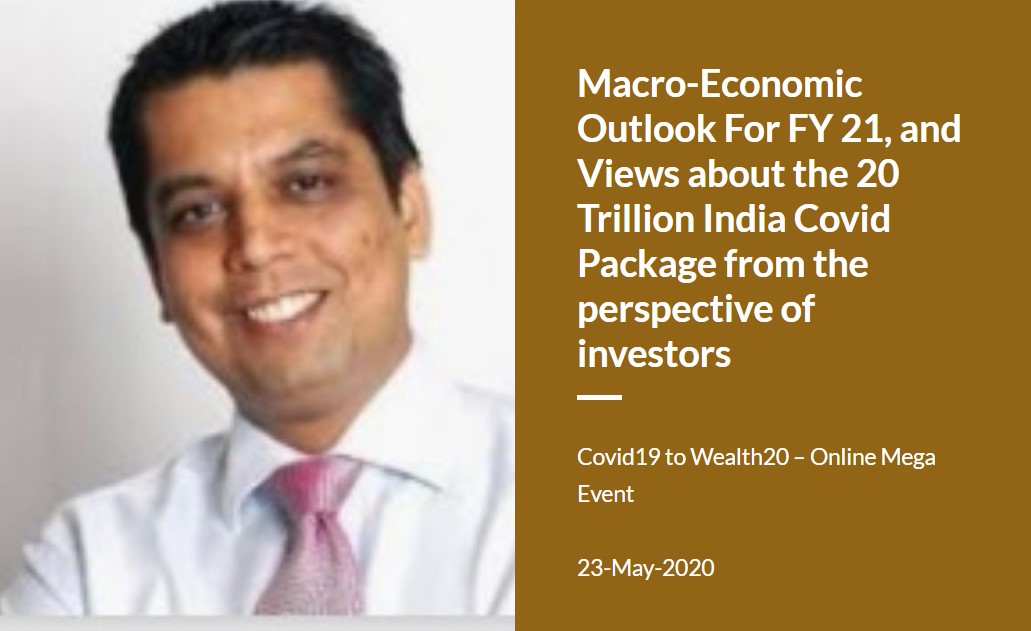 Headwinds:
• For any Economy there are 3 prime movers – Consumption, Investments, Net export. In the Indian context, domestic “consumption” is comprised of 60% and rest two roughly command 20% each. In the after math of COVID crises, all three, for different reasons are suffering. If you see, the aggregate demand has been badly hit because of lock down. This is accentuated by the job cuts, cut in salaries. Certain sectors like MSMEs which contribute a lot to the total employment were already stressed in the after math of demonetisation, roll out of the GST. COVID crises have pushed them, and problems have gotten worse for them. From the perspective of Banks & NBFCs, unsecured loans and personal loans have never been a worry like wholesale corporate loans have been during NPA crises, but COVID crises raises a lot of questions to this assumed to be low risk asset book of banks and financial sector. Scenario for “Investments” is also worry some. Indian govt’s spending ( roads & railways ), was high in the first term till 2019, but, now fiscal stress reduces the room for govt spending in the 2nd term. Private sector Investment was already low, and stress here has increased because of COVID. “Exports”, the 3rd mover, is also badly affected because of lock down and since there seems to be a rising wave of Nationalism all over. These slowing engines of growth require much more attention of policy makers over next couple of quarters.

Tailwinds:
• Agri sector contributes 15% to GDP, but, nearly 50% of Indians are dependent on Agri and allied sectors. There is good Rabi crop this year and IMD has predicted a good monsoon in coming quarter. Rollout long pending agri reforms like scraping of essential commodities act, allowing farms to sell their produce anywhere in the country etc will pave a way for corporatization of agriculture sector and should lead to growth of this sector in medium to long term.

• Fall in global crude oil prices is a huge positive for India. Remember 85% of oil is what we import, and every 1 dollar fall in its price, leads to 1 bn dollars of saving on our import bill. This has cascading effect on lower inflation, lower current account deficit, and accommodative monetary stance.

• From risk assets perspective, nearly 1/3 of global debt is yielding negative returns, and with massive printing of global money by global central banks, when economies open up from lock down, we will see money gravitating to economies where there is growth potential and India in that context can attract its own share.

• MSCI has deferred the rebalancing of the index till June quarter as they want to see the impact of the measures taken by govt in the last budget. Roughly 1.5 Bn dollars of passive flows and 5 billion dollars of active flows could come to India by Sep’20 in this rebalancing.

• FII holdings today is at the lowest level since 2013, at ~20%, govt holding is also at a record low of at ~ 6.6%, DII holding is at 14%, and so is retail holding at 14%. Who has increased the holding? It’s the Indian promoters, who have basically sensed that the under valuation in their franchises, and they are on the buying spree.

On market valuations we’re at 18 times, 1 year trailing earning, but forward earnings are uncertain, so one should look at markets with a cautious stance; at the same time one could be constructive.

Take me to Videos